Simon came into our care in January 2014.  I was in Brisbane on ECSA Inc business and took a call from a vet who’d had an elderly Cocker Spaniel handed in as a stray.  They asked if we would take him and of course I said yes.  I went to collect him and smelled him before I saw him.  He was so very thin, but his ears…oh my goodness.  His ears were so badly infected, the smell was putrid and I drove away with the windows open in the car!!  He had a bath and then went into foster care.  He was such a lovely, sweet boy.  I decided to call him Simon.

After his vet check the next day, the news wasn’t good – Simon had multiple health issues, and not much could be done for any of them without exacerbating the others.   The least invasive tests and treatments were undertaken for the conditions we could treat, the rest were simply managed.  It was decided that he would stay with his foster carers permanently, and we knew that he probably wouldn’t be with us for long due to his health.

Under the loving care of his dedicated foster parents, Simon thrived.  His ears cleared up quickly, he gained weight and became a healthy boy for his age.  He was curious, nosy and bonded strongly to his new dad.  He loved everyone and he made sure everyone knew it.  He enjoyed daily strolls, trips to the pet store, pet bakery and trips to the beach where he would make everyone laugh when he swam – he’d blow bubbles through his nose in the water.  He loved the robo vac his mum used and would turn it on for his own amusement.  He also loved to supervise and road test material that his mum laid out, to make beds and jackets for shelter dogs, he’d give them a 4 paw rating.  The ECSA community delighted in watching his progress, and enjoyed the happy updates and photos.

One day while out on a walk Simon collapsed and had a seizure.  He was rushed to the vet where it was determined that he likely had cancer, and that treatment wasn’t an option due to his age and other health issues.  To avoid any suffering the decision was made to put him to sleep.

**Everything humanly possible was done to locate Simon’s owners, every authority was notified, no one reported him missing or came looking for him, and it is our belief, as well as the vets that it was in fact his owner who handed Simon in. 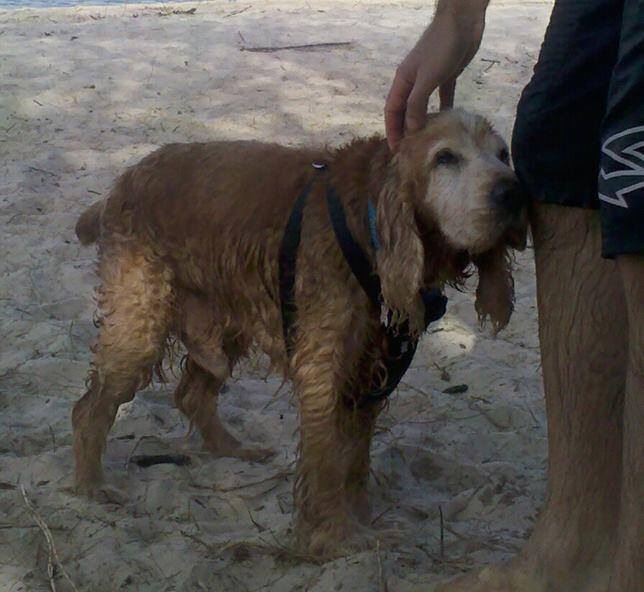