Henry was our third permanent resident, he came to us in August 2013.  He is about 14 years old and he was suffering terribly with a nasty, smelly ear infection.  His former owners choice of treatment, was to put his ears up in a hair elastic, that was pulled so tight that half of one of his ears died and fell off!  Under the loving, dedicated care of his foster mum, Henry too thrived and continues to do so today.

Henry has been with us over a year now, and is a healthy, happy boy.  He loves to play and gives the younger dogs a run for their money!  If it weren’t for his dear, wise, white old face you’d never guess he is nudging 15 years old.

**Henry’s foster mum isn’t with ECSA anymore, but in Henry’s best interests, it was agreed that he would stay with her permanently. 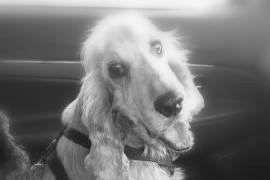